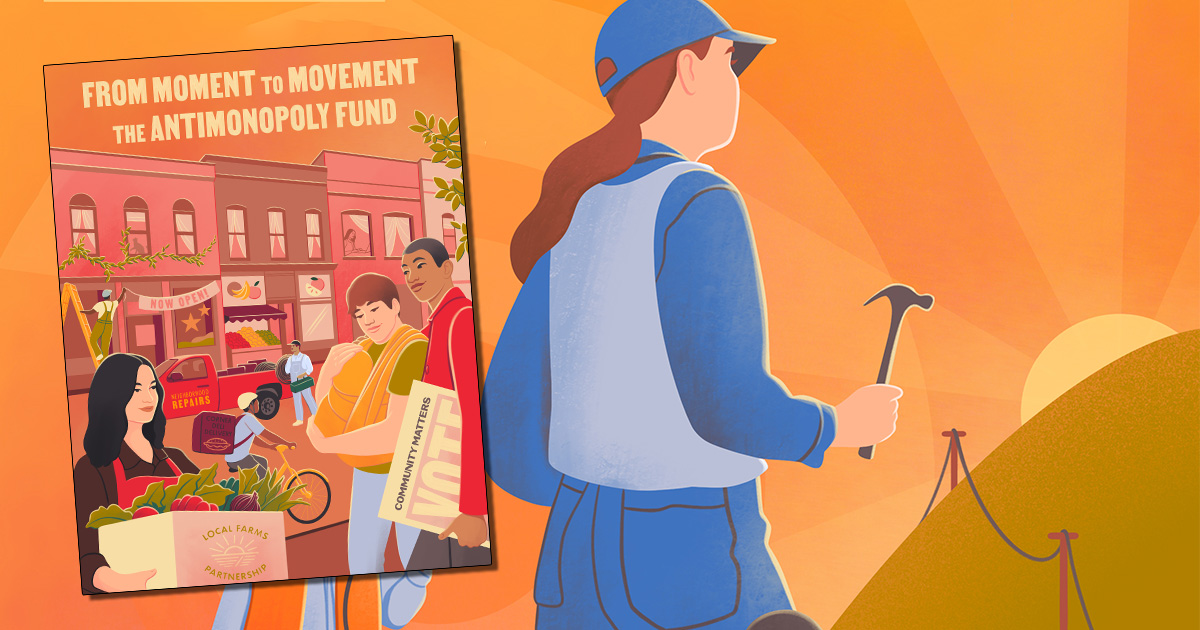 INSIDE PHILANTHROPY – After Pooling Their Money to Take on Corporate Monopoly, Funders See Signs of Progress

Read More: INSIDE PHILANTHROPY – After Pooling Their Money to Take on Corporate Monopoly, Funders See Signs of Progress

A child watches her mother suffer because her family can’t afford life-saving medicine. A farmer’s planting season is jeopardized by a broken tractor, because the manufacturer designed it so the owner can’t repair it. An entrepreneur trying to grow her business is coerced by the online marketplace where she sells her goods. A young adult dealing with poor working conditions stays in his position because of a non-compete agreement.

Amount that monopolies cost the average American per year

What do these scenarios have in common? They show how today’s rampant corporate consolidation harms us all.

Most American industries have seen increased concentration in the last few decades, if not the last century. An estimated 70-90% of the global grain trade, 89% percent of the baby food market, and 98% of the cell phone market are each controlled by only four companies. And that’s just to name three industries–the list goes on and on.

This accelerating trend worsens the lives of all Americans. Consumers have fewer, more expensive choices. Workers enjoy less bargaining power. The country suffers from lower productivity and less innovation. Democratic institutions and markets bend to the will of enormous corporations. Our freedom and security get degraded.

It wasn’t always this way. The founders wanted to balance private interests with public power. Starting with the Sherman Antitrust Act of 1890, the US reined in monopolies and limited corporate consolidation for decades. It wasn’t until the mid-20th century, with the rise of small government, pro-corporate thinking, that this trend was reversed.

It’s time to bring back this robust antimonopoly tradition. Economic Security Project is bolstering a dynamic new movement against monopolies by working with the people most affected–workers, small businesses, people of color, and other constituencies. We are: supporting and amplifying leaders who are tilting the balance of power back from corporations to people; growing the field by seeding antimonopoly newcomers and expanding capacities of antimonopoly vanguards; resourcing timely initiatives to build momentum; funding new strands of empirical research; and shifting cultural narratives around monopoly power.

We’re building an inclusive, multiracial democracy and economy–one where communities of color, small businesses, workers, and everyday people can thrive, instead of being exploited by monopoly power. We are creating a much-needed hub where both new and long-standing antimonopoly advocates–across the academic, philanthropic, policy, legislative, cultural, and organizing realms–can coordinate, build, and strategize together, bringing this important movement into the mainstream.

Our work is already paying off. There is more attention now to the problem of concentrated economic power than there has been for many years. We helped create this momentum, and we’re building on it. It takes a whole host of solutions–not just antitrust–to solve this problem, but we are moving closer to a world where consumers have abundant choices; families have access to life-saving medicines; and workers have collective power and the freedom that comes with it.

Partners in the Field

In being against concentrated power, we are for an inclusive, multiracial democracy and economy—one where communities of color, small businesses, workers, and everyday people can thrive, instead of being exploited and subjugated by corporate monopolies. We’re renewing democracy in the digital economy to promote fair markets where users, small business leaders, workers, and communities of color can thrive, not just monopolies. We’re investing $750,000 in 26 proposals to respond to the unique antimonopoly moment we’re in. This outstanding cohort consists of 41 researchers from 33 different institutions. Investing in Research to Inform a New Paradigm

We need a clear, empirical understanding of the mechanisms that monopolies use

Visit link: We need a clear, empirical understanding of the mechanisms that monopolies use

Advocates call for organizers of color to be embedded in antimonopoly fight.

Visit link: Advocates call for organizers of color to be embedded in antimonopoly fight.

What Happened to Organized Labor?