The stunning economic crisis for those on the bottom of the economic ladder demands massive relief to those who need it most. Recurring direct payments targeted at those who need the most help, continuing until the economy recovers, will:

Action at the Scale of the Crisis

The most unequal recession in modern times.

This is an income recession, and half of Americans are in financial trouble: Though unemployment has declined some, 46% of households have experienced serious financial trouble during the pandemic, including running out of savings, trouble affording food, paying utility bills, and paying their rent or mortgage, and 60% of those who have lost income are still making less than they were before the pandemic. 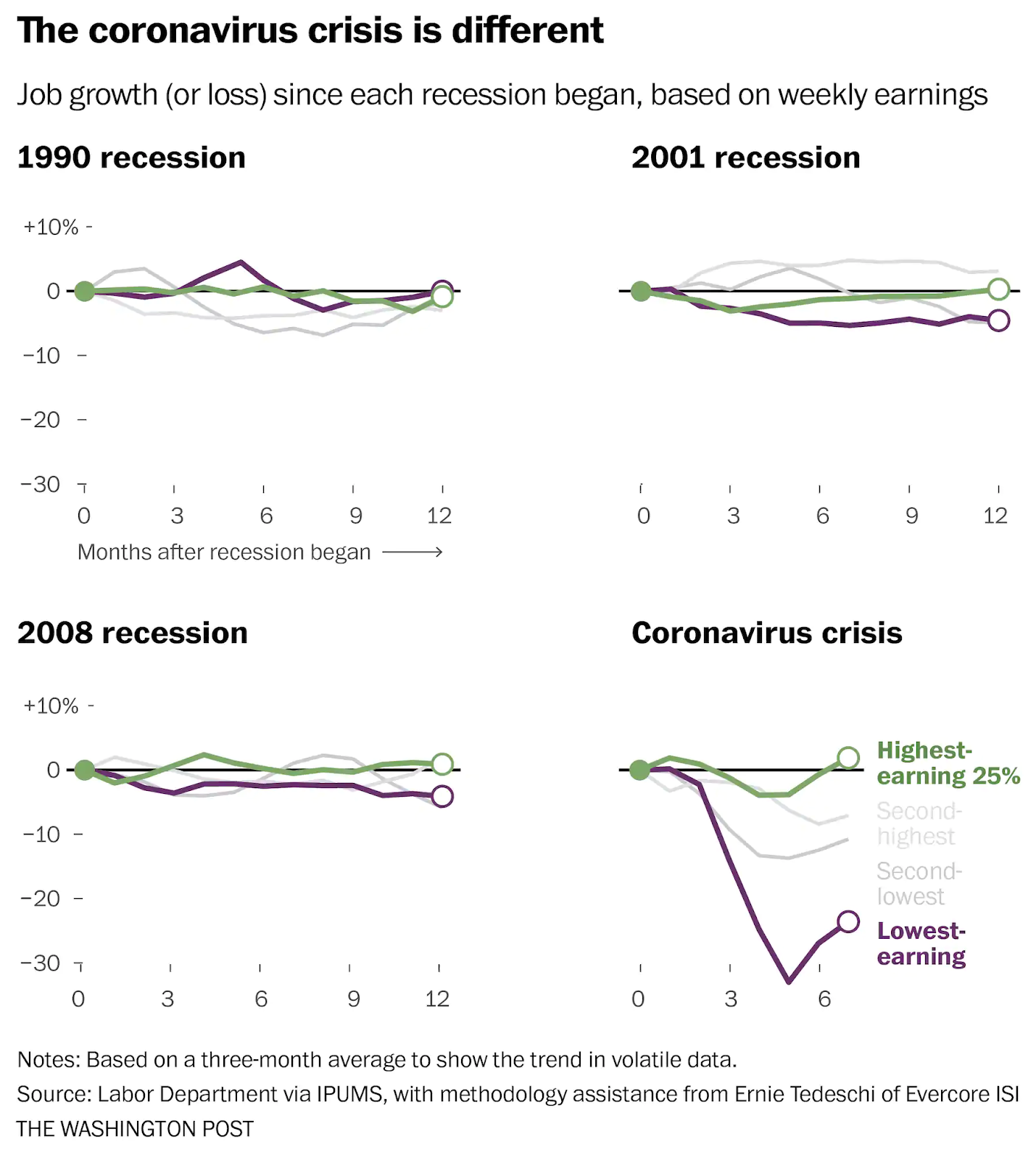 Targeted, Recurring Checks Are the Key to an Even Recovery

This is the inequality recession. The data show a clear chasm between high-income and low- and middle-income families:

Future relief must focus on people in the bottom 60% – those who are still struggling and need money, and who the data show will spend it.

Targeting to the bottom 60% makes recurring checks possible – a critical part of any real recovery.

Other programs, including unemployment insurance and the Child Tax Credit, cannot solve the problem on their own. Direct payments are critical to reach all of those struggling to make ends meet, particularly Black, Latinx, and Native Americans who are hit hardest by the pandemic.

The data show that direct payments have been very successful at improving financial wellbeing. Direct payments:

Increases in EITC and CTC were never designed to address the urgency and scale of the current crisis. While they are essential long-term solutions to reducing poverty, EITC and CTC do not address the immediate needs of American families nor do they respond to the magnitude of financial insecurity people are facing. These programs are crucial complements to direct checks, not alternatives, in part because most of the benefits from those credits will not come until 2022. In a best-case scenario, a monthly CTC could distribute $10 billion three months after passage, while direct checks could distribute hundreds of billions of dollars in a matter of weeks.

Even the expansions to the two programs proposed in the HEROES Act would reach only a fraction of the households that have lost income due to the crisis, and are estimated to lift only as many people out of poverty as a single round of direct checks. A year of quarterly direct checks would likely lift 3-4 times more people out of poverty than the EITC/CTC expansions alone. That is why these expanded credits and recurring direct payments must go hand in hand.

Unemployment insurance is less accessible by far to Black workers than white workers. As AFL-CIO economist Bill Spriggs has written, and the data show, unemployed Black workers are much less likely to receive unemployment benefits than white workers. These racial disparities have long existed in unemployment insurance, from its original design to failures in state administration – “rationing by friction.” Direct payments, on the other hand, if implemented appropriately and directed to low-income families, could virtually eliminate these roadblocks to access and be 100% targeted to high-need families. To get help to all households who need it, unemployment insurance is essential but not enough: direct payments are a critical complement.

Stimulus checks have a bigger impact for families of color. The data show that direct payments help close the racial income gap. Another round of payments as in the HEROES Act would increase Native American, Latinx, and Black family incomes by 4.1%, 3.9%, and 3.6% respectively, compared to 2% of household income for white families. If direct payments were limited to those in the bottom half of the income spectrum, those racial equity benefits would intensify.

Checks Should Be Targeted to Those Who Need the Most Help, and They Should Continue Until the Economy Recovers

The impact of the two rounds of relief checks Congress has already sent has been broad and deep – reducing poverty, helping families meet basic needs, and boosting an ailing economy. But these

The 2009 Recovery Act was too small, and a decade later many Americans still struggled.
Many economists agree that ARRA fell short of delivering a speedy recovery and the decisive political win that would have come with it, because it wasn’t big enough, sustained enough, or visible enough to everyday Americans (and thus viewed as a bailout). Christina Romer, chair of Obama’s Council of Economic Advisers described the ARRA as, “Not the knockout punch the administration had hoped for.” A 2021 Biden stimulus faces a much more serious economic crisis, especially for low-wage workers.

If relief is big enough, it can shave years off this recession. Recent research from the Brookings Institution suggests that a $2 trillion relief package, including a round of direct payments, would get GDP briefly back to pre-pandemic levels by late 2021, but that periodic checks (alongside other policies) would keep the economy strong through 2022. Of course as the last recession proved, GDP growth isn’t shared equally across households, and low-wage workers could be left behind for years. However, direct checks targeted to the bottom half of households would ensure those struggling the most, particularly Black, Latinx, and Native Americans who have been hit the hardest by this crisis, aren’t left behind. Brookings adds that without a major relief bill, “That return likely would not occur for perhaps as long as a decade.”

Direct checks will help millions of Americans feel relief faster than almost any other policy. Americans experiencing economic disaster need relief that is both fast – the IRS can get money into most Americans’ bank accounts far faster than a $15 wage, infrastructure, or tax credits – and sustained – Lake Research found 76% of voters support “regular payments until the economic crisis ends” rather than a one-time payment (56% strongly). The Brookings analysis confirms that direct payments would have a greater impact on GDP in the immediate term than other major policies under consideration.

Early 2021 will likely be the best chance to pass a stimulus at the scale needed, perhaps with bipartisan support. Assuming the Biden administration works to pass a relief package through a closely-divided Senate in the first 100 days, while the economic impacts of COVID are still widespread and palpable for most Americans, multiple direct checks could be a potential area of bipartisan agreement. Relief at the scale of the crisis will be a popular investment: 70% of swing-district voters (and 70% of voters nationally) say the government should spend what it takes to help people meet basic needs, while only 20% would scale back support to reduce the national debt​.

Politically, a Biden-Harris recovery package must deliver visible results. Direct checks are effective, proven, and tangible for voters. The 2009 ARRA was criticized for delivering aid largely through hidden pathways, and that is part of how it ended up portrayed as a “bailout.” However, no voter will forget receiving a relief payment in the first few months of a new administration, especially if it continues monthly or quarterly and helps them meet their basic needs. That will pay crucial political dividends in the midterm elections and in the 2024 presidential race, as will running in 2022 and 2024 on a strong economy rather than a sluggish recovery.